Discover the work of Antoni Gaudí and the legacy he left over the city of Barcelona by visiting some of his masterpieces. This tour is the best way to learn more about the Catalan architect and see his artistic evolution.

You will start with his first important project in Barcelona, Casa Vicens, and you'll end up with Gaudí's most important work, the still unfinished Sagrada Familia, passing through Park Güell, one of his most emblematic works. These three works can be classified into three different architectural types: domestic, urban and religious. Learn how Gaudí combined perfectly the functionality of these three different places with his personal style.

The house will open its doors exclusively for you. It was built between 1883 and 1888 in the heart of the Gràcia quarter, which at the time was an independent town from the city. During the second part of the XIX century and in the middle of industrial growth, Barcelona lived the demolition of the medieval walls. As a result, the city began to grow following a reticular shape named Enlargement (Eixample). That’s the reason the old town of Barcelona was united to other surrounding villages such as Gràcia. In the middle of this busy period, Gaudí developed his first important project: Casa Vicens. Discover the different style of architecture Gaudí played with here. In fact, this house has an unusual oriental and mudéjar feel, but in some ways was also ahead of the modernism style in Catalonia. Casa Vicens is the eighth building in the city that's listed as a UNESCO World Heritage Site.

When you have finished your visit here, your guide will accompany you to the coach that will take you to the meeting point of the next part of the tour: Park Güell.

Located in the upper part of Barcelona with incredible views of the city, Park Güell is one of the most emblematic works of the architect Antoni Gaudí. The park has been declared UNESCO World Heritage Site in 1984. Here, Gaudí displayed all his creative talent with a naturalistic and organic style with the aim to achieve a perfect integration of architecture and nature. Admire how the architect handles one of his favorite techniques, the 'trencadís', omnipresent in all his creations. Be ready to discover all the secrets hidden in this park through thanks to your tour guide's explanations! At the end of the guided tour, you will have some free time and the guide direct you to the bus that will take you to the Sagrada Familia.

The Basilica and Expiatory Temple of la Sagrada Familia is one of the most visited buildings in the world and is considered Gaudi’s masterpiece. Despite the construction of the church in 1882, the Sagrada Familia is still unfinished. You'll visit its astonishing interior that's rich in symbolism, and with your guide, you'll discover how Gaudí got most of his inspiration from nature, which he thought of as God's masterpiece. As a result, the building is a perfect fusion between architecture and spirituality. At the end of the visit, the guide will take you to the elevator entrance to one of the towers where can admire spectacular panoramic views of Barcelona. In addition, you can visit the museum which hosts drawings, plaster models and pictures about the history and development of this basilica from its early beginnings to the present day. The museum also gives valuable information about Gaudí’s life and career.

Casa Vicens. Please be at the meeting point 15 minutes before the start of the tour.

What to remember
Read more
When
Read more
Provider
Julia Travel
Booking fee
Good news! No extra fees are applied to this booking.
Cancellation policy
Receive a 100 % refund if you cancel up to 48 hours before the activity begins. 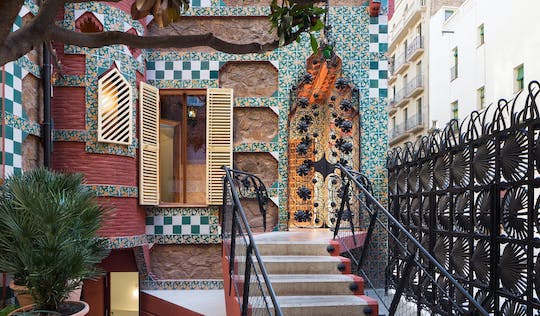