E-Voucher
Do this because
What to expect

Not only in Berlin-Mitte there are many sights, but also in the quieter, less touristy Charlottenburg with its Gründerzeit houses, parks and squares, the baroque palace, the Lietzenseepark and the Tiergarten. And, of course, the Memorial Church, the zoo and the Kurfürstendamm. This Charlottenburg, its "Kiez", your guide would like to bring closer to you during this bike tour.

Enjoy the ornamental places from the time of the "richest city of Prussia": Savignyplatz, Karl-August-Platz (Wed and Sat weekly market), Klausenerplatz, Stuttgarter Platz, Walter-Benjamin-Platz. Learn about the circumstances of the assassination of the student Benno Ohnesorg in 1967, which is considered the trigger of the student movement of the 60s and 70s. Take a look at the oldest and most beautiful art nouveau swimming pool in Berlin. Continue past the imposing City Hall and a taster visit to the city's best delicatessen for a well-deserved coffee and cake break at Villa Oppenheim, the Charlottenburg-Wilmersdorf Museum of Local History. Strengthened, the tour continues to the Museum Quarter and the rebuilt Charlottenburg Palace, as well as the Old Town neighborhood (preserved in part by squatter activities) with its stucco facades, gas lanterns, pubs and the idyllic "Zickenhof". Past the former Reichskriegsgericht (Imperial War Court), the route leads to one of Charlottenburg's gems: the Lietzensee lake.

Via bourgeois courtyards, squares and residential streets, as well as a detour to Kurfürstendamm, you will return to the starting point, Savignyplatz.

Meeting point:
Meet your guide at the S-Bahn station Savignyplatz at the exit Bleibtreustraße.
What to remember
Read more
Provider
Charlottenrad
Booking fee
Good news! No extra fees are applied to this booking.
Cancellation policy
Receive a 100% refund if you cancel up to 24 hours before the experience begins. 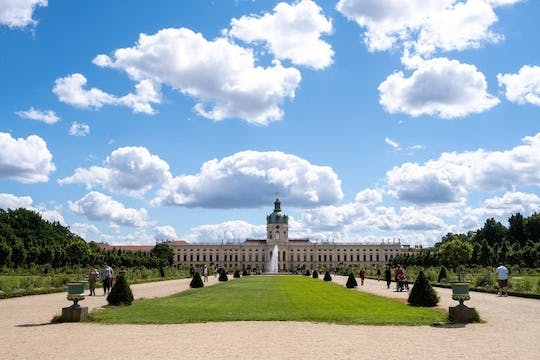