On this two-day tour, see some of the most important historical and cultural sites in Spain. On day one, you'll visit Toledo and Segovia. On day two, you'll take a tour of the Royal Palace of Madrid.

The city of Toledo, known by many as the second Rome, was declared a World Heritage Site by UNESCO. During your tour, enjoy a panoramic visit of the Cathedral of Toledo, Mirador del Valle, The Monastery of San Juan de los Reyes, and Puente de San Martin.

In Segovia, get to know the Aqueduct, the Alcázar, and the Cathedral of Segovia. The Aqueduct is about 15 km long and supplies water near the marsh of Revega. The Azoguejo Square is the best-known and best-preserved area in the city.

The next day, visit the Royal Palace of Madrid, which used to be the official residence of the Spanish Royal Family. Nowadays, it’s used exclusively for receptions, ceremonies, and official events. The Royal Palace is also called Palacio de Oriente, due to its proximity to Plaza de Oriente square, on the east side of the palace. This visit includes some of the most impressive rooms, like the throne lounge, the gala dining room, the royal chapel, and the parade grounds.

Meeting point:
Day 1 – Toledo and Segovia, Plaza Las Ventas in front of Julio Camba Street no 1Day 2 – Royal Palace, Square Opera, in front of Statue of Isabel II
What to remember
Read more
Provider
AMIGO GROUP EUROPA S.L.
Booking fee
Good news! No extra fees are applied to this booking.
Cancellation policy
Receive a 100% refund if you cancel up to 1 day before the experience begins. 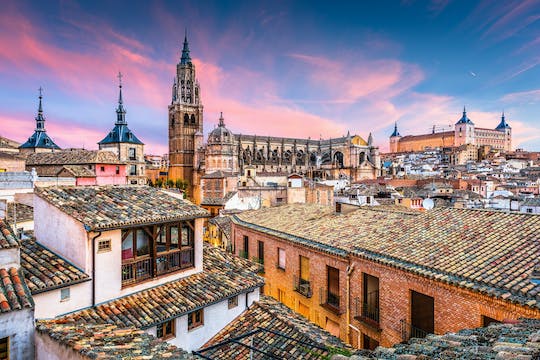 Mobile voucher accepted
from:
$95.00
Sorry, it's sold out
Unfortunately all tickets have been sold out for this event