Availability: Daily (except Monday) at 10 AM and 2 PM

This 3-hour walking tour will expose you to some of the greatest works of Prussian art, German Romanticism, and French Impressionism, all located in Berlin's Museumsinsel (Museum Island). Your tour will start with an examination of the island itself – five museums created in the early 1800s on Spree island for extensive Prussian art collections. Then you'll move on to the Alte Nationalgalerie (Old National Gallery), a veritable sanctuary for the arts, including the captivating collections of the Prussian Cultural Heritage Foundation. Here you can wander through the massive rooms filled with 19th century paintings and sculptures. Your tour will focus on Caspar David Friedrich, whose works of spiritual beauty demonstrate both his unique style as well as key aspects of German Romanticism. The tour will also include works of Realism by Max Liebermann, Lovis Corinth, and Adolf Menzel.

Afterwards, you'll move on to French Impressionism, with masterpieces by Edouard Manet, Claude Monet, Auguste Renoir, Edgar Degas, Paul Cézanne, and sculptures by Auguste Rodin. Your guide will highlight the transformative ideals of this movement as well as individual styles, changes in materials, and the influence of photography. Your tour will cover the cultural, creative, and political elements which helped create this amazing era of art.

Meeting point:
The entrance of the Alte Nationalgalerie on the Museum Island (there is only one entrance) at Bodestrasse 1-3
What to remember

You will receive a separate e-mail invoice for your tickets so that the guide can prepay for them, sparing you from long entrance lines. Please send an email if you will be holding Museum Island passes or Berlin passes that already cover your admission to Alte Nationalgalerie. 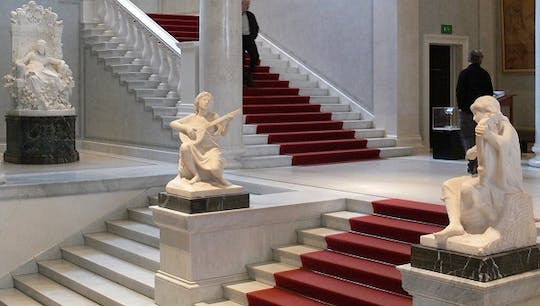 Printed ticket only
from:
£46.00
Sorry, it's sold out
Unfortunately all tickets have been sold out for this event