This tour allows you to delve into the architectural essence of Antoni Gaudí and dig deep into his visual power. Your guide will focus on a set of turning points that include a project in early 20th-century Manhattan, the last commission from his patron, Eusebi Güell, and his first architectural steps with the Sagrada Família. Learn about eclecticism and the end of modernism, the Crypt of Colony Güell and the Sagrada Família. You will see the Antoni Tàpies Foundation and Casa Lleó Morera by Domènech I Montaner, Casa Amatller by Puig I Cadafalch, some hidden Eixample courtyards and, of course, Casa Calvet, Casa Batlló and Casa Milà by Antoni Gaudí (Please note that you don’t go inside the buildings).

Meeting point:
Meet your guide at the sculpture Monument al llibre (Big Red Book) by Joan Brossa at the intersection of Passeig de Gràcia and Gran Via, in front of the Comedia Cinema
What to remember
Read more
Provider
Barcelona Architecture Walks
Booking fee
Good news! No extra fees are applied to this booking.
Cancellation policy
Receive a 100% refund if you cancel up to 3 days before the experience begins. 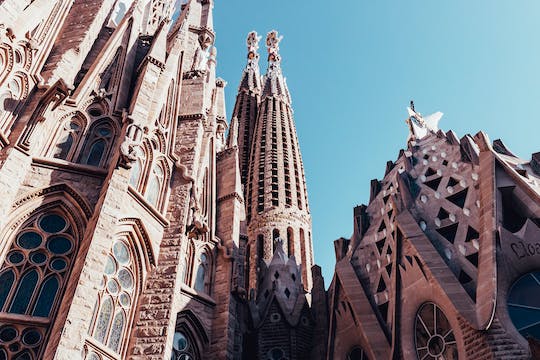